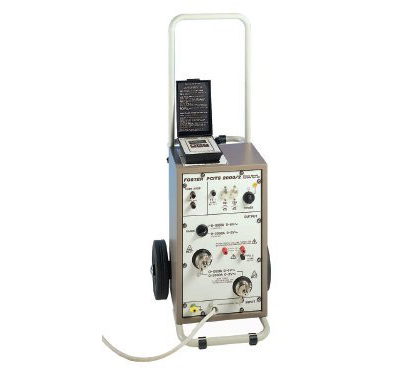 This Primary Current Injection Test Set is rugged, self-contained and designed for operation by one person. The PCITS2000/2 is a two-wheeled unit (with a handle).

The test set has a separate hand-held controller connected by an expandable cable. This allows the operator to work close to a protective relay while controlling a test. The maximum output current is 2000 A a.c. at line frequency.

By changing the range switch, half the rated output can be obtained at twice the voltage. Additionally, a separate auxiliary voltage output of 250 V, 2 A a.c. or 125 V, 2 A a.c. is available for testing voltage operated relay coils or checking the magnetization characteristics of current transformers.

All outputs are fully variable and each test set has a nominal duty cycle when delivering full current and voltage. Continuous operation is possible at 40% of maximum current. Current and voltage outputs are varied automatically from the controller. The output current is supplied through wing nut terminals to the low inductance lead set (available optionally).

The voltage output has a separate pair of terminals. Each test set has a built-in timer which itself has three modes of operation ‘Forward’, ‘Run-back’ and ‘Dual’. These enable the function of a protective relay to be fully tested in regard to its operating times. The timer may be stopped by the contacts of the protection relay under test, or by the cessation of current flow or manually by the operator. The timer stop inputs accept either unenergised or a.c./d.c. energised relay contacts.

All current and voltage levels are shown on the dot-matrix liquid crystal display incorporated in the controller. The display also shows the elapsed time measured by the counter. The equipment is microprocessor controlled and three tactile keys on the control box take up the selected function allotted to them during the testing programme. These functions are indicated on the display. The display can be set to read in any of five languages, English, French, German, Italian and Spanish.

Circuit protection is by circuit breakers and fuses, and a thermal cut-out prevents overheating. Controlled switching ensures that, in the event of power failure or the thermal cut-out operating, the output cannot be re-energized until the controls are reset, thereby offering protection to the equipment and the operator.